Palermo is a city marked by past con­querors, each Baroque church and Norman-Romanesque facade a reminder of prosperous eras past. But while many of the Sicilian capital’s architectural landmarks could best be described as crumbling, amid the cracks are hints of progress: like a budding contemporary art scene and forward-thinking restaurants energizing rundown neighborhoods.

Now, during the holiday season, the rough-edged port city is at its liveliest, with festive lights brightening labyrinthine alleys, Christmas markets bringing cheer to even the most pugnacious Palermitani, and family-run restaurants serving traditional Sicilian feasts. And here the celebration extends well into the new year, continuing until Epiphany on Jan. 6.

An evolving art scene is proving that Baroque and contemporary can coexist side by side. Exhibit A is at Quattro Canti, a historic intersection with ornate fountains and marble statues. There, mere steps from the Baroque flourishes is the Francesco Pantaleone Gallery, a white-walled second-story space that presents conceptual shows from rising Italian art stars like Giuseppe Lana (free). The juxtaposition continues with the cutting-edge exhibitions at Palazzo Riso, a beautiful late-Baroque building whose restoration after decades of neglect resulted in a home for the Museum of Contemporary Sicilian Art (admission, 6 euros). But the age difference between the works and the walls is most pronounced at the Galleria d’Arte Moderna, or GAM, which moved into a complex of interconnected structures — including a former Franciscan convent — dating to the 15th century (admission, 7 euros).

Sicilian wines have become sommeliers’ darlings in recent years, so use the pre-dinner window to see what the buzz has been about. One worthy spot is the unassuming Enoteca Vinoveritas, a tiny neighborhood wine shop that doubles as a low-key local hangout during aperitivo. Glasses of idiosyncratic Sicilian varietals like grillo and nero d’Avola are poured at the short wooden bar and accompanied by a generous variety of snacks. 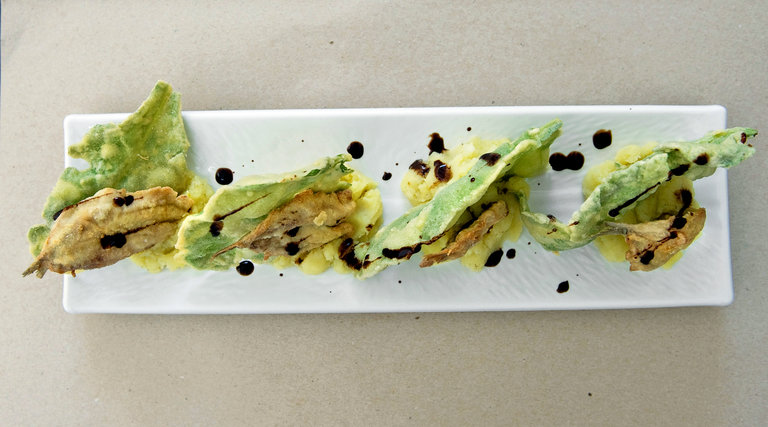 A platter of crisp sarde allinguate from PerciaSacchi. CreditAndrea Wyner for The New York Times

Venture into the winding alleys of the Capo district for a rewarding taste of the territory at PerciaSacchi, a pioneering restaurant opened in 2012 by two young women. Named after an ancient Sicilian grain, the intimate restaurant is devoted to the local-focused kilometer-zero philosophy and serves seasonal menus inspired by traditional recipes. Recently, that included a platter of crisp sarde allinguate, a Palermitano specialty of marinated and fried sardines (14 euros). There was also a creative riff on sfincione, which reimagined the simple street food as a sourdough pizza topped with ricotta from nearby Gangi, tuma cheese, fresh breadcrumbs and a generous shaving of bottarga (14 euros). To drink, try a biodynamic wine from the Sicilian producer Arianna Occhipinti, or an artisanal ale from the local Trimmutura brewery.

Behind the green expanse of Foro Italico, the city’s nearly 10-acre front lawn that overlooks the sea, massive stone sea walls conceal an unusual night life locale. Kursaal Kalhesa is a rambling complex housed in a spectacular palazzo with cavernous stone halls that host regular music and cultural events. Depending on the night, you may find yourself ensconced in a romantic jazz bar listening to a live band, or dancing in a packed discoteca with a D.J. spinning beneath ancient vaulted stone ceilings.

The chaos of the Capo street market — singsong calls of vendors hawking goods to the jostling crowd, bloody sides of beef strung up for sale, scooters weaving through the packed lanes — will wake you up faster than any espresso can. After getting an eyeful, slip past the ramshackle stalls and into the Chiesa dell’Immacolata Concezione al Capo, an easily missed trove of Baroque workmanship (admission, 1 euro). The plain exterior of this 17th-century church gives no hint of the magnificence waiting inside: beautiful bas-reliefs, dazzling frescoes, marble statues and intricately inlaid walls that are more amazing given the market disarray right outside.

For four decades, the Corona family has presided over Vini del Paradiso, a lunch-only osteria frequented by multigenerational families and groups of well-groomed men who resemble extras from a Mafioso movie. Arrive early to secure one of the few tables inside the charmingly spartan space decorated with yellowed photos of former popes. There are no menus, so the proprietor will suggest specials, the best of which feature seafood, like roasted calamari, swordfish-studded caponata, and spaghetti with anchovies and toasted breadcrumbs. Lunch for two, about 30 euros (cash only).

Whether it’s your first trip or your tenth, a visit to Palermo isn’t complete without a stop at Palazzo dei Normanni, the royal palace. The refurbished palm-tree-shaded gardens of the neighboring Villa Bonanno now make the walk there more pleasant, as would a route past the city’s grandiose cathedral in all its Norman-Moorish-Gothic-neo-Classical glory. First-timers should proceed directly to the Cappella Palatina, the gilded chapel of the Norman Kings, to marvel at the golden Byzantine mosaics (admission, 10 euros). Others may prefer to check out a temporary exhibition on the first floor, which recently hosted a blockbuster crucifixion-themed show by the Colombian artist Fernando Botero.

For proof that the canon of Sicilian desserts extends far beyond the sweet-ricotta-filled cannolo and cassata, visit Pasticceria Cappello, a pastry shop on a run-down street behind the palace. Don’t miss the torta setteveli, a cake native to the city featuring seven chocolately, hazelnutty layers. Or ifyou prefer frozen sweets, head to Al Gelatone. This colorful gelato shop scoops dozens of artisanal variations, like watermelon granita, lemon-basil sorbetto, and toasted-almond and pistachio gelato offered Sicilian-style, in a sweet brioche bun. 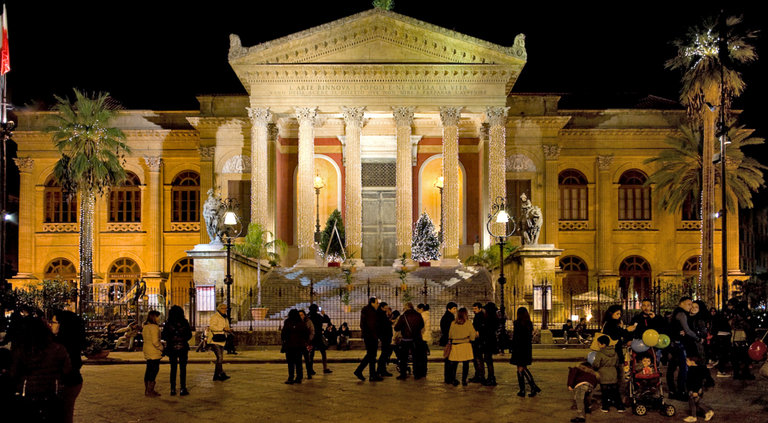 The grand ocher sandstone facade of Teatro Massimo, flanked by palms, will be familiar to cinephiles: The final scenes of “The Godfather Part III” played out on the theater’s steps. But now, after decades marred by budget problems and corruption charges, Italy’s largest opera house is building a reputation for the performances staged inside. The new year will usher in a new season of ballets, concerts and, of course, operas, including Wagner’s “Götterdämmerung” and Verdi’s “Attila.” Tickets from 12 euros.

Palermo’s diverse street food — from arancine (fried rice balls) to stigghiola (barbecued intestines) — is legendary. For variety and a modicum of comfort, head to Nni Franco u’ Vastiddaru, a street-food restaurant with plastic tables and chairs on an adjacent piazza. The specialty is panelle, rectangular fritters of chickpea flour, served on a seeded bun. Pair that with the fritti misti, a mix of arancine and croquettes, or the pani ca’ meusa, a cheesy spleen sandwich. Dinner for two, about 20 euros.

The craft-beer-and-creative-cocktail trend has yet to land on Sicily’s shores, but Bar Garibaldi proves that’s not needed for a fun late-night drink. Named after a central figure in the unification of what was then the Kingdom of Italy, the divey hangout brings together an eclectic crowd — everyone from students to hard-drinking communists. Order a Negroni at the bar, find a seat in the back amid propaganda posters and shelves of left-leaning literature, and enjoy the music and sociable atmosphere. 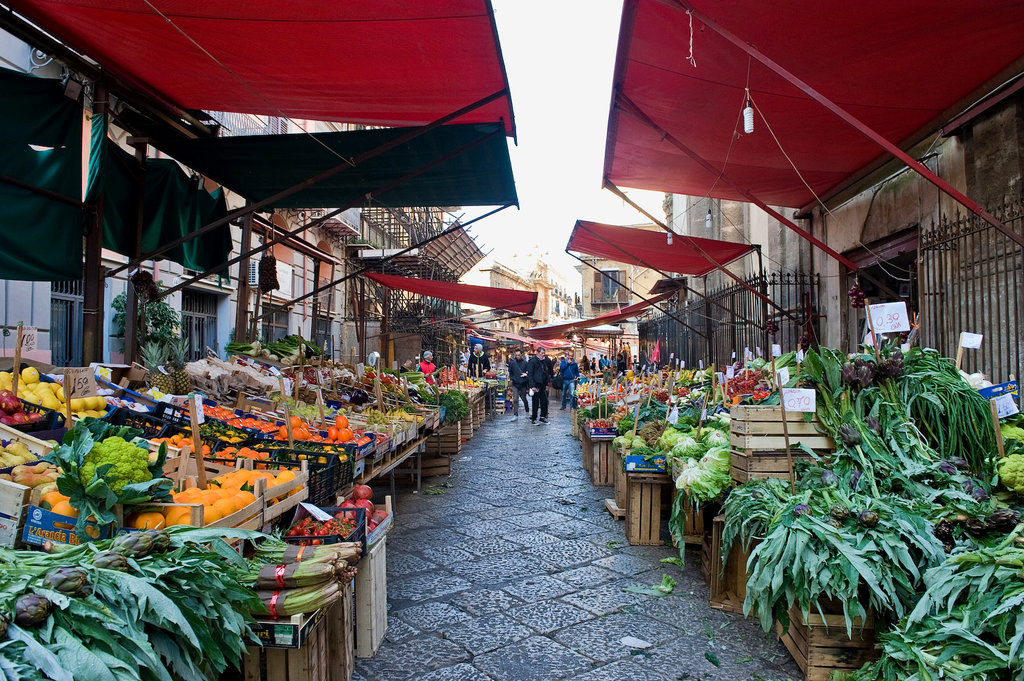 A market in Palermo. CreditAndrea Wyner for The New York Times

Benanti, Save the Date! The USA Calendar

By Francesco Pensovecchio in News on 22 January 2016

By Francesco Pensovecchio in News on 22 January 2016